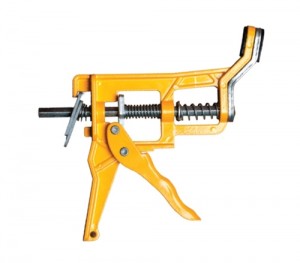 Shutgun, the creator of the world’s leading fire sprinkler shut off device, announces a newly released concealed head sprinkler shut off device.
Shutgun is used in emergencies where individual fire sprinkler heads have been accidentally activated. Accidental sprinkler activation is one of the largest culprits of damage to multi-unit residential and commercial structures.  Shutgun is currently used by facility and construction managers from leading construction, building and management organizations, as well as fire departments all over the world.
“There is no limit to the amount of accidents that can occur on a construction site, in an enclosed work space, or throughout office buildings, apartments and hotels, especially when heavy equipment and machinery is being operated,” said Greg Patterson, engineer and co-inventor of Shutgun. “In cases where a contractor or employee breaks or accidentally activates a fire sprinkler head, the amount of damage caused by the spill because of clean up, productivity lost and time wasted can run into the tens of thousands of dollars.”
Water from a fire sprinkler head is released at pressures as high as 170 psi and up to 25 gallons per minute. Shutgun was specifically designed for construction managers to address this messy and costly problem.
A unique fusible link ensures that the water from a fire sprinkler head is securely shut off within seconds, but does not affect continued fire protection to the remainder of the building.
Shutgun’s new concealed head tool is specifically designed for concealed sprinkler head models found in conference centres, lobbies, ballrooms and theatres.
To learn more about Shutgun, visit https://www.shutguntool.com/
About Shutgun: More than 15,000 Shutguns have been sold as a tool box staple for building managers, superintendents and contractors worldwide. Conceived by a Toronto District Fire Chief of 35 years, Shutgun is a one-handed, easy-to-use fire sprinkler shut off tool. Shutgun avoids shutting off the main water supply to the sprinkler system, thus giving continued fire protection to all units and has a fusible link that releases upon fire flare up or recurrence. Shutgun shuts off most types of sprinkler heads including the concealed and semi-recessed style now popular in commercial complexes.

H.E. Butt Grocery has opened a new store in Cibolo, Texas, and plans to cut the ribbon on a 55,000-square-foot e-commerce fulfillment center there later this year outfitted with automation solutions. The center will join a growing footprint of fulfillment facilities that have brought curbside