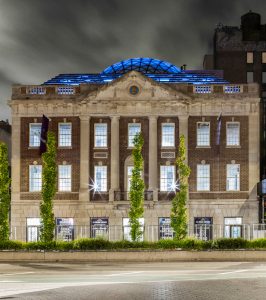 For nearly two centuries, Tammany Hall stood as symbol of all things political in New York City's Union Square. Built in 1928, the iconic brick building is the former headquarters of the Tammany Society, a political organization named after chief Tamanend, the leader of an indigenous group called the Lenape people who settled on land along the East Coast, including present day New York City.
Over the years, Tammany Hall became known for charges of corruption levied against leaders such as William M. “Boss” Tweed. Its power waned during the tenure of New York City Mayor Fiorello La Guardia (1934-1945), and the organization was rendered extinct after John V. Lindsay took office in 1966.
Today, the building at 44 Union Square has undergone an extensive renovation and expansion. Designed by BKSK Architects and developed by Reading International (RDI) with Edifice Real Estate Partners as the owner’s representative, the project involved the addition of a multi-story space-frame dome atop the 90-year-old structure. Leading the charge on the construction side was CNY Group.

“We think a major trend over the next year or so will be building repositions and repurposing existing non-performing buildings.” — Ken Colao, founding Principal & President, CNY

As part of the renovation, a glass and steel dome modelled on the shape of a turtle shell rises from the top of the building—a symbol that pays homage to the Lenape people. BKSK consulted with the Lenape Center, an institution led by Lenape elders that upholds the legacy of the group through programming and exhibitions, on the project.
The rounded roof in the shape of a turtle shell is a reference to the origin story of the Lenape, which, as legend has it, rose from the water on the back of a turtle.
We sat down with Ken Colao, Founding Principal and President, CNY Group; Agis Phillips, Project Executive, CNY Group, and Timothy Allen, Senior Project Manager, CNY Group, to get their insights into the project. 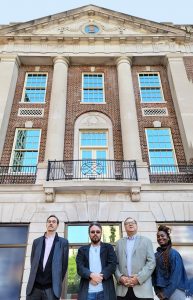 Give us a snapshot of the construction market today? What are you seeing out there?
Ken Colao: Last year set a record for money spent on construction in New York City. All projections showed 2020 was on track to match that number or break it, but the construction market has softened significantly since the start of the pandemic. Even with all the setbacks and delays, 2020 will still rank with the Top 5 years of all time when ranked on volume across all sectors.
In particular, the large-scale luxury residential condo and rental market has cycled into smaller, well-located opportunities in established neighborhoods. A significant uptick of market-rate housing starts in the suburbs is now a focus of ours as well as affordable workforce housing.
The commercial and retail markets have also paused to determine needs and the reinvented design of spaces.
Give us a snapshot of the project. What was the goal? What were some of the things the CNY team had to navigate?
Agis Phillips: Tammany Hall's latest owner had acquired an attractive, historic and prominently located building, which was set to be renovated for contemporary commercial usage rather than a teardown because of its façade’s status as a New York City landmark.
But by preserving the façade and demolishing the building’s steel structure, CNY was able to develop a more efficient concrete layout. Thus, we allowed for an additional floor area ratio (FAR) that could now be tapped, but was ultimately not utilized. New continuous floor plans for the contemporary program requirements had to be fit within the buildings landmark exterior.
In addition, the architect and CNY Group attended meetings together and were able to obtain landmark approval for the project. This allowed the team to remove and reconstruct the façades they obtained and increase the floor area by topping the historic structure with a grid-shell dome. Though the initial cost for this dome was 50% over budget, we implemented value engineering solutions that brought the dome cost back to budget, allowing the volume of space to accommodate the addition of floors.
As for the façade, the initial design called for retaining non-street façades. CNY Group identified this as a source of added cost, risk and potential schedule delay. 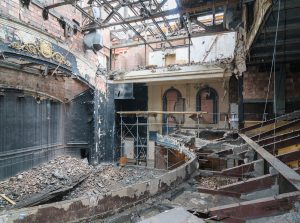 What were some of the special features of the project?
Timothy Allen: One of the building's special features was the addition of 30% of area within the existing exterior walls and the placement of a glass dome on top of the building. For this to happen, a unique concrete corbel structure had to be designed and constructed to support the dome and transfer structural loads properly throughout the building.
Take us through the construction and design strategy.
Allen: A comparative structural analysis was completed between concrete and steel options to evaluate if the structural steel frame could be left in place to provide bracing for the historic façade, or if it must be braced from the outside while a new concrete structure would be built inside it.
An extensive bracing scheme was determined to be the most cost-effective and least risky method of retaining and restoring the elements required by landmarks, while building a new concrete building behind them. CNY Group also participated in the review of the design development work of the consultants to identify and eliminate design redundancies, as well as enhance buildability.

What's the most important part of the relationship between you and the Tammany Hall team?
Phillips: Collaboration. We believe in working in harmony with the designer, owner, engineers and restoration consultants to unlock the latent value of the project
How do you think the construction market will start shaping up?
Colao: Thoughtfully carried out, smaller and well-located projects will slowly begin or restart design development with employers adopting lessons learned from the pandemic.
What will your customers be looking for from you?
Colao: Customers will be looking into strategies to unlock hidden values of a property.
What do you see as some of your biggest opportunities?
Colao: We think a major trend over the next year or so will be building repositions and repurposing existing non-performing buildings.
What is your optimism level?
Colao: We are very optimistic that after some immediate challenging times, the economy and the construction business will fully recover and begin new, exciting growth.
What trends are you seeing?
Colao: We are seeing many trends at the moment. Most have to do with repositioning and repurposing. This includes warehouses, office spaces and commercial buildings. As more space throughout the city becomes available because of businesses and people leaving, we think landlords will use this time to update buildings that are in dire need of renovation.