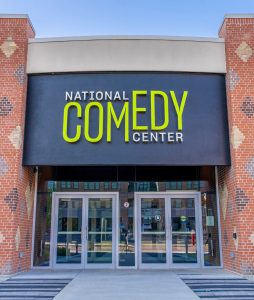 The National Comedy Center, which opened in Jamestown, New York in 2018, is home to the country’s foremost archive of the history and art form of comedy. The groundbreaking museum is housed, in part, in a remarkable historic building—the Jamestown Gateway Station.
Built between 1930 and 1932, the station featured Hope’s custom steel windows as part of its chic Art Deco design. As a result, Hope’s Windows Inc., another Jamestown institution, was a natural choice to provide steel replacement windows for the historic building, as well as steel windows and doors for the new construction when the National Comedy Center redeveloped the site. Since then, Hope’s Windows has continued to support the National Comedy Center and its contributions to the wider Jamestown community.
Restoration and adaptive reuse of a local landmark
The building that now comprises part of the National Comedy Center was an Erie Railroad station on the New York City-to-Chicago passenger train route. At the height of passenger train travel, it was luxurious—built of marble, steel and glass. The station was taken out of commission in the 1970s and fell into disrepair, even as it was listed on the Federal Registry of Historic Places.
Eventually, a local group secured funding for its rehabilitation, and the station was restored to its original 1930s condition in 2012.
To help revive some of the historical aspects of the building, Hope’s Windows manufactured custom fixed, projected, side hung and single hung replacement steel windows for the project with custom hardware to match the existing historic hardware.
The grand entrance to the old station lobby, which now houses a gift shop, features original steel doors, transoms and a distinctive glazed-in clock. This entrance was refurbished during the restoration. “Seeing the station restored to its former beautiful condition, with our original windows as part of that restoration, has been truly incredible,” says Matt Fuller, National Sales Manager at Hope’s Windows.
When it came time to add its addition and building connector wing to the existing train station and Board of Public Utilities substation that would comprise the National Comedy Center, center officials wanted to retain the same look and quality as in the original building.

“We ended up with a stunning mix of the old and new buildings,” says Tom Benson, Chairman of the National Comedy Center and a member of the team that worked to fund and execute the station restoration project. “The windows in the connector wing, identical to those in the station, help the whole campus to come together visually.”
Both types of windows were installed in the new construction for the National Comedy Center to match the existing windows in the station’s front façade.
The National Comedy Center comes to life
Once the restoration and redevelopment projects were completed, the National Comedy Center opened, bringing to life an idea several decades in the making. When Lucille Ball, a Jamestown native, was asked by the city if it could celebrate her comedy career and legacy, she suggested a much larger scale project—not simply a museum devoted to her and I Love Lucy.
“Lucille Ball wanted the town to create something bigger than just a museum of memorabilia dedicated to individual comedians; she wanted us to create a living, breathing tribute to the art form of comedy,” Benson says.
The museum that resulted has been declared by Congress to be the official home of comedy in the US. Rather than being simply artifact-based—though the museum does hold its fair share of impressive artifacts from Ball, Jerry Seinfeld, George Carlin, Carol Burnett, Joan Rivers, Rodney Dangerfield, and more big names in the comedy world—the National Comedy Center is over 90% interactive and electronically-based.
Visitors enter their comedy preferences into a kiosk at the entrance to the museum in order to create a personalized humor profile, and then wear an RFID bracelet programmed with this information that enables their experience in the museum to be completely tailored to their individual preferences and interests.
While most visitors spend a few hours in the building, the museum’s more than 50 exhibits contain many days’ worth of content. What’s more, visitors are emailed content from their visit once they leave so they can revisit and continue to learn—and laugh—after they return home. 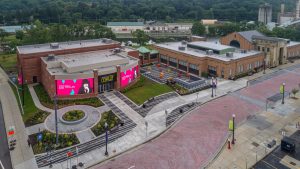 Collaboration and community
TIME Magazine named the National Comedy Center one of its “World’s Greatest Places in 2019,” and USA Today named it the “Best New Museum for 2020,” making it both a local institution and a nationally- and internationally-acclaimed destination.
“The Comedy Center has been a huge draw to Jamestown and a high profile project for our area,” Fuller says.
The Hope team worked to help out in every way they could, from handcrafting the building’s windows and doors to ensuring that the National Comedy Center is accessible and sustainable for years to come. “After we opened up, we started an endowment fund campaign to make sure that this museum would be sustainable in perpetuity,” Benson says. “They are far more than just a contractor; their commitment to the project, from one Jamestown institution to another, has been deep and far-reaching.”
Brian Whalen is VP of Sales at Hope's Windows Inc., one of the largest domestic manufacturers of luxury steel and bronze windows and doors. A 26 year industry veteran, Whalen leads Hope's regional manager and independent representative teams located throughout the United States and Canada.

Kroger signs on to backup energy storage solution in California

Kroger is adopting e2Cos.’ R3Di system to guard its Ralphs distribution center in California against power outages. Installation for the backup energy storage solution is expected to wrap up by early summer, allowing the on-site system to be used as primary or standby backup power