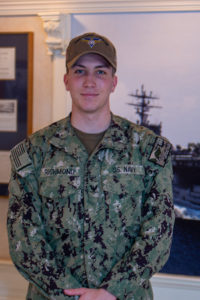 Petty Officer 3rd Class Caden Richmond, a native of Cumming, Georgia, serves the U.S. Navy aboard one of the world’s largest warships, the U.S. Navy aircraft carrier USS Carl Vinson.
Richmond joined the Navy two years ago. Today, Richmond serves as a mass communication specialist.
“I joined the Navy to do something different,” said Richmond. “I asked myself when would I be in a better spot to join the military than right now.”
Growing up in Cumming, Richmond attended West Forsyth High School and graduated in 2019. Today, Richmond relies upon skills and values similar to those found in Cumming to succeed in the military.
“My hometown taught me the importance of hard work and commitment,” said Richmond. “Working through adversity builds character and makes you stronger.”
Aircraft carriers provide unique capabilities and survivability. They are a powerful exhibition of the American Navy's legacy of innovation, technological evolution, and maritime dominance, according to Navy officials.
USS Carl Vinson, like each of the Navy’s aircraft carriers, is designed for a 50-year service life. When the air wing is embarked, the ship carries more than 70 attack fighter jets, helicopters and other aircraft, all of which take off from and land aboard the carrier at sea. With more than 5,000 sailors serving aboard, Carl Vinson is a self-contained mobile airport.
Aircraft carriers are often the first response to a global crisis because of their ability to operate freely in international waters anywhere on the world’s oceans. Carrier strike groups have the unique advantage of mobility, making them far more strategically advantageous than fixed-site bases. No other weapon system can deploy and operate forward with a full-sized, nuclear-powered aircraft carrier's speed, endurance, agility, and the combat capability of its air wing.
The Carl Vinson and its crew recently returned to San Diego following an eight-month deployment to U.S. 3rd and 7th Fleets areas of operation.
“At the heart of every ship, whether ashore or at sea, are the Sailors that make up the crew and carry out the Navy’s missions with precision and dedication,” said Capt. P. Scott Miller, commanding officer of Nimitz-class aircraft carrier USS Carl Vinson. “The Vinson Sailors recently demonstrated this in our execution of a highly successful 7th Fleet deployment and continue this legacy of excellence at home in San Diego.”
During the USS Carl Vinson’s most recent deployment the ship was underway for 262 days, conducting dual carrier operations and multinational exercises, including maritime security operations and integrated training between surface and air units.
USS Carl Vinson was the first aircraft carrier to deploy with a combination of fourth and fifth-generation platforms within Carrier Air Wing (CVW) 2 that represent the “Air Wing of the Future,” including the F-35C Lightning IIs and the CMV-22B Ospreys.
Since USS Langley's commissioning 100 years ago, the nation's aircraft carriers, such as USS Carl Vinson, and embarked carrier air wings have projected power, sustained sea control, bolstered deterrence, provided humanitarian assistance and disaster relief, and maintained enduring commitments worldwide.
"The aircraft carrier is our U.S. Navy's centerpiece, our flagship, and a constant reminder to the rest of the world of our enduring maritime presence and influence," said Rear Arm. James P. Downey, USN, Program Executive Officer (PEO) Aircraft Carriers. "These ships touch every part of our Navy's mission to project power, ensure sea control, and deter our adversaries."
With more than 90 percent of all trade traveling by sea, and 95 percent of the world’s international phone and internet traffic carried through fiber optic cables lying on the ocean floor, Navy officials continue to emphasize that the prosperity and security of the United States is directly linked to a strong and ready Navy.
Richmond and the sailors he serves with have many opportunities to achieve accomplishments during their military service.
“Completing an eight-month deployment has been my greatest accomplishment,” said Richmond. “It was challenging at times, but returning home safely and achieving our command goals was well worth it.”
As Richmond and other sailors continue to train and perform missions, they take pride in serving their country in the United States Navy.
“Serving the Navy means having a fulfilling job where I'm directly supporting global objectives much larger than myself,” added Richmond.