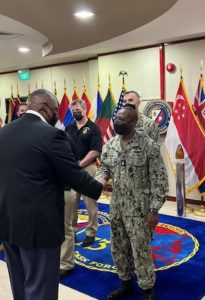 A Sylvania, Georgia, native serving in the U.S. Navy as a chief petty officer assigned to Destroyer Squadron (DESRON) 7 met the U.S. Secretary of Defense in Singapore, June 12.
Chief Electrician’s Mate Recardo Wright, from Sylvania, Georgia, graduated from Screven County High School and enlisted into the U.S. Navy in 2002.
“I joined the Navy to serve our great nation and to reap the wonderful opportunities the military has to offer such as learning new skills and training, paid college, traveling the world, and leadership opportunities,” said Wright.

Wright currently serves as the DESRON 7 Engineering Department Leading Chief Petty Officer and is responsible for all deployed littoral combat ships maintenance and critical repairs in the Indo-Pacific.
Wright met U.S. Secretary of Defense Lloyd Austin III during his visit to Commander Logistics Group Western Pacific/Task Force 73 at the Sembawang Naval Installation following his remarks at the Shangri-La Dialogue in Singapore. Mr. Austin was born in Mobile, Alabama, and raised in Thomasville, Georgia.

“As my leadership was introducing me to Secretary Austin, I could see his expression light up hearing about another leader from a little town in Georgia,” said Wright. “When I told him I was from Sylvania, he asked how I joined the Navy being so far from the ocean – we had a good laugh at that.”

“It was honor meeting Secretary Austin knowing how much of an impact he has on the entire DoD,” said Navarra.

“It was a humbling experience to meet and shake hands with the Secretary of Defense, a Georgia native like myself. He has set the bar high for others to mirror,” said Wright. “I have met so many great leaders being in the Navy and each one has different ways of leading. Because of them, I have learned to be the leader that I always wanted coming up as a junior Sailor.”
As the U.S. Navy’s forward-deployed destroyer squadron in Southeast Asia, DESRON 7 serves as the primary tactical and operational commander of littoral combat ships rotationally deployed to Singapore, functions as Expeditionary Strike Group 7’s Sea Combat Commander, and builds partnerships through training exercises and military-to-military engagements.