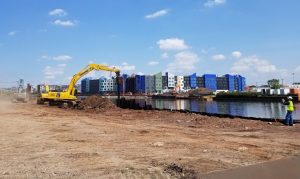 For the first time in 100 years, the residents of Newark, New Jersey have access to their Passaic River waterfront. This is due in large part to a construction project performed by the US Army Corps of Engineers, New York District—an initiative that is restoring the river bank with a new bulkhead wall designed to prevent the shoreline from eroding.
At roughly 80 miles long, the Passaic River in northern New Jersey flows in a highly circuitous route, meandering through the swamp lowlands between the ridge hills of rural and suburban northern New Jersey. Called the Great Swamp, it drains much of the northern portion of the state through its tributaries. In its lower portion, the river flows through the most urbanized and industrialized areas of the state, including along downtown Newark. 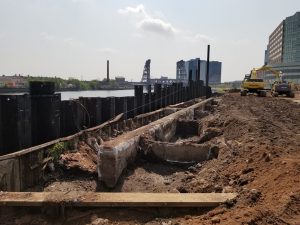 “It’s interesting that something as simple as a bulkhead can be the kickoff of a riverfront redevelopment project for the City of Newark, becoming a key feature in the revitalization of Newark’s Downtown,” says Jason Shea, project manager, New York District, US Army Corps of Engineers.
For more than a century, the banks of the Passaic River have been abandoned because the shoreline was eroding and the river was filled with trash and plagued with contamination from one of the state’s largest toxic waste sites.
The community has been wanting a riverfront park to revitalize the waterfront area and the work the Army Corps is doing is laying the foundation for their plans.
The Army Corps of Engineers, in collaboration with the New Jersey Department of Environmental Protection and the City of Newark, is performing The Joseph G. Minish Passaic River Waterfront Park and Historic Area Project. 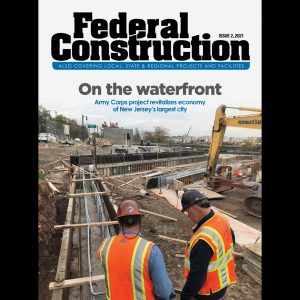 The project encompasses almost two miles and more than 30-acres of land along the west bank of the Passaic River between Bridge and Brill Streets in Newark, New Jersey, the largest city in the state.
The Army Corps is overseeing the construction of 6,000 feet of new bulkhead along the river, which entails restoring 3,200 feet of riverbank, constructing a 9,200-foot waterfront walkway and creating landscaping using native plants. In addition, it also is establishing park facilities, plazas, walking and biking paths, playgrounds, and baseball and soccer fields.
Shea says that revitalization work like this has proved successful in other cities, such as San Antonio, Chicago and Portland, Oregon, to name a few. “The Newark waterfront is already starting to show redevelopments where work has been performed and also on the opposite side of the river in Harrison, New Jersey. These developments will have views of the waterfront park, rather than a rundown streambank with a dilapidated bulkhead, trapping trash and debris. It’s a great example of how the benefits of this project are extending regionally, outside Newark City limits.”
For the residents, the park is a welcome return. “The park brings a welcoming feel to the area, leading to investments in commercial and residential properties,” Shea says. “It’s been great to see this happening over the past two decades in Newark.”
The project is expected to be completed by fall 2023.
________________________________________________________
Dr. JoAnne Castagna is a Public Affairs Specialist and Writer for the U.S. Army Corps of Engineers, New York District. She can be reached at joanne.castagna@usace.army.mil.