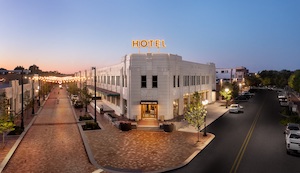 The 1930s-era art deco Indianapolis Coca-Cola Bottling Plant employed thousands of workers throughout some of the nation’s most turbulent decades—until the 1960s, when plant owners moved their expanding bottling operations to Speedway, Indiana leaving behind one the city’s most beloved landmarks. After years of steady deterioration, Hendricks Commercial Properties saved the architectural gem from ruin by initiating a grand restoration project for the long-neglected Bottleworks District.

As Director of Preservation for Indianapolis-based RATIO Architects, Dave Kroll and his design team were chosen to transform the fading North Mass Avenue property into a 139-room boutique hotel and garage food hall while resurrecting its past splendor. This anchor project launched Phase I of the much anticipated $300 million overhaul.

Kroll explained, “We get into buildings that have been around for a long time for good reason—they are well-built and have served a significant and worthwhile purpose in society. We retain as many of the features and materials as possible and replicate what cannot be saved.”

The original Coca-Cola Bottling plant and garages comprised the oldest and most lavish structures in the Bottleworks complex, and great care was taken to preserve the historical integrity of the design. One of the site’s most treasured features, the exquisite terra cotta façade, had steadily deteriorated due to weathering and neglect. A team of specialty masons took painstaking efforts to repair and restore the exterior to its original grandeur —blending skill, patience, and artisan wizardry.

Julie Zent, historic window specialist for RATIO, took on the intricate task of matching the 150+ original wood windows that had once complemented the plant’s decorative exterior. Throughout the near two-year process, she worked with Dan Kovas, of Huntertown, Indiana-based G-2 Architectural Products, to orchestrate window design details, specifications, updates and product delivery.

All historical replications were sourced through Weather Shield, a Medford, Wisconsin firm with an unparalleled reputation for authentic window design. Territory Manager, Alan Broderick, commented, “We have a team of architectural window experts who combine artistry and technical expertise to match original specifications while adding modern features.”

For a project of this magnitude, the design team needed to create models in advance before moving to production. While most of the bottling plant windows had been discarded in favor of low-cost replacements, a few of the originals remained in the garages.

Kovas recalled, “Knowing what to do and doing it early was crucial to staying on track. On our first day on site, Alan and I were able to get samples of the original window components and get them back to Wisconsin for analysis.”

Kroll added, “Although deteriorated, they were able to get accurate dimensions from those windows, which allowed us to eventually duplicate the design.”

The importance of that find saved time, money and hassle. If no original units had been left in place, Zent’s team would have relied solely on documentation, drawings and photos to calculate sizes.

During the ongoing historical approval process, Kovas closely collaborated with Broderick’s team to implement any necessary architectural modifications and adjustments.

“The exciting part of obtaining the artifact samples,” Kovas recalled, “was that the Weather Shield crew initially created a plastic 3-D printer replica of the wood components, so that the architects could make modifications before we moved into the shop drawing phase. This added precision to the operation and ultimately accelerated the timeline for approval.

Once the detailed side-by-side shop drawings of the original unit and the proposed replication were finalized, Broderick and his team were able to create a full-sized mockup in the Weather Shield workshop.

“The multi-step process was a combination of modern technology and old school wood working,” noted Kovas.

Zent explained, “The window replication process is complex. Fortunately, our local and state people worked well together to reach consensus. Discussion on changes often included up to nine people weighing the pros and cons and working towards resolution.”

One of those early discussions occurred at the mock-up installation site, where a group of developers, architects and historical advisors gathered to view the product and compare the details to one of the original units. The side-by-side contrast created a then-and-now visual that displayed the craftsmanship that went into the beautiful replication. Onlookers were able to see the window as it looked nearly one hundred years ago—with modern weather proofing added to the design.

“Weather Shield pulled their team together so quickly to get the job done,” Kovas noted. “They were the first to produce a mock-up, which allowed time for the various contributors to provide feedback. Some minor tweaks were requested, but the core design was approved the first time around, which is seldom the case.”

Although the original windows were double hung, the design team required the sashes to be fixed in place for climate control purposes, whereas the garage windows were designed to be fully functional double hung units. All specified product directives were completed at the manufacturing plant before shipping.

Zent noted, “Weather Shield provided fourteen different sizes in four separate configurations. Due to the complexity of the terra cotta restoration, openings varied in size throughout, resulting in subtle modifications to multiple units.”

Installer and entrepreneur Sean Edwards of National Glass & Hardware LLC worked with the window team from the early days of the mock-up. His crew carefully removed the old units while working in tandem with terra cotta artisans to repair any of the delicate crumbling components.

Edwards recalled, “The installation was implemented in phases as different portions of the façade neared completion. We installed the windows in various sizes, and all were extremely maneuverable. Weather Shield did a great job creating the right look to match the originals.”

In addition to the ornate exterior restoration, the RATIO team designed the stunning art deco interior spaces as well. As Bottleworks Hotel visitors return from foodie outings or a game of Indy-style duck pin bowling, they will be dazzled by an impeccably refurbished lobby filled with colorful polished tile and shining brass fixtures, evoking an atmosphere of a bygone era.

The aesthetic impact of the design is already turning heads in downtown Indy. The clean lines of the historic window design beautifully complement the sparkling terra cotta restoration. The hotel welcomed its first guests on December 15, 2020 while putting finishing touches on its soon-to-open office spaces.

The nearby Garage Food Halls unveiled 14 restaurants and shops on January 5, 2021. Designed as a marketplace, the 36,000 square foot venue will add more shops and offices in the spring and will feature live music. Covid-19 CDC guidelines are in place throughout the Bottleworks complex including social distancing and mask requirements.

“We are in 2021, and are excited to bring something new and fresh to the city and do it in a safe manner,” noted the food hall’s general manager Nicole Ulrich.

As Phase I of the Bottleworks Restoration neared completion, Kroll reflected, “Our duty is to preserve the character of the building while finding innovative ways to create new uses for spaces—windows are an integral part of the authentic design.”