Entering the world of 3D printing can be both exciting and challenging. First, you need to learn how to tell the difference between a number of available materials and printing processes. Second, you must find a piece of 3D modeling software that you will enjoy using.

It would probably be best to start with the basics, though. 3D printing, which is also known as additive manufacturing, is a term that encompasses a number of different printing techniques. In 2015, the ISO/ASTM 52900 standard was established, with its main aims being the standardization of additive manufacturing terminology, and the classification of each type of 3D printing.

So far, seven different categories of additive manufacturing techniques have been identified. In the article below, you will find a description of what each category is about and what its common use cases are. Additionally, you will get to find out what the best 3D modeling software for 3D printing is. Now, read on! Once you are done, understanding 3D printing will get a whole lot easier. 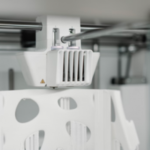 3D modeling is a process of using a piece of software to create a model of any three-dimensional object, whether it is to be used by a company like Tork CNC, a video game developer, or a custom jewelry manufacturer. Yet, in order for a 3D printer to figure out what to do, you need to convert that model into a language the machine can understand. That is where SelfCAD comes in.

SelfCAD is an online 3D modeling application that allows you to model, sculpt, and print various objects using just one system. There is no need to switch between different applications and platforms to model and print objects.

Moreover, SelfCAD is a cloud-based application. As such, it means you do need to download any software or updates, ever. In other words, if you are looking for reliable and convenient 3D modeling software, SelfCAD is definitely the way to go!

SLA was the first 3D printing technology in the world. It was invented by Chuck Hull, who filed a patent for SLA in 1986 and founded a company called 3D Systems to commercialize it.
SLA printers use mirrors known as galvanometers, with one being positioned on the Y-axis and another on the X-axis. The galvanometers work by aiming a UV laser beam at a vat of liquid photopolymers resin. The laser cures and solidifies a cross-section of the object that is being printed, building it up in layers.

SLA-built parts are frequently used for rapid prototyping and manufacturing custom molds and tools at lower cost in comparison to traditional manufacturing. Companies can use SLA for immersive learning purposes, advanced research, and the production of custom jewelry and physical models needed for character modeling, sculpting, and prop making.

SLS is the process of creating an object using polymer powder and powder bed fusion technology. It was developed and patented in the 1980s at the University of Texas at Austin, under sponsorship of the Defense Advanced Research Projects Agency.

To begin with, polymer powder is heated up. When it reaches a temperature that is just below the polymer’s melting point, a recoating blade deposits a 0.1-millimeter-thick layer of powdered material onto a building platform, and a fiber or carbon-dioxide laser scans its surface.

Next, the laser selectively sinters the polymer powder to create a solid cross-section of the object. Just like with stereolithography, a pair of galvanometers focuses the laser on the correct location.
After the entire cross-section is scanned, the entire building platform will move down one layer in height and the recoating blade will deposit another layer of powdered material atop the previous layer. Then, the laser will sinter another cross-section.

The steps listed above are repeated until the object is completely manufactured. The uncentered powder will stay in place to support the object, eliminating the need for any support structures. Later on, it can be recycled and used over and over again.

SLS is used for end-use production and manufacturing of small batches. It can also be utilized for rapid prototyping and creating mockups of products to gather in-field customer feedback, as well as for prototyping of polymer components and medical devices. 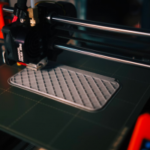 DMLS produces objects in a similar way to SLS. The two differ in three significant ways, though. First, DMLS is used to produce metal parts from finely powdered metal. Second, while the powder does provide physical support during the printing process, objects printed using DMLS still need additional support structures. Third, the powder is not melted during the printing process. Instead, it gets heated up to a point where it can fuse together on a molecular level.

DMLS is often used to make custom prosthetics. Such prosthetics are typically made of titanium alloys, making them strong, resistant to attack by the body, and easy for bone to grow into. Aside from that, DMLS finds use in dentistry to make custom crowns, bridges, and partial dentures. It is also used to manufacture parts needed in commercial aircraft and rockets.

FDM is a commonly available and affordable type of 3D printing technology. First, a filament is loaded into a printer and fed to a printer nozzle located in the extrusion head. The nozzle is heated to a desired temperature and the filament is pushed through it, causing it to melt.

Once that step is complete, the printer starts moving the extrusion head along specified coordinates. By doing so, it lays down the melted filament atop a build plate, where it cools down and solidifies. Upon the completion of a layer, the printer proceeds to lay down another layer. The entire process repeats itself until the printed object is formed.

FDM has a low accuracy and resolution when compared to SLA and SLS. Consequently, it is not the best option for manufacturing parts with complex features and intricate designs. Instead, FDM is used for simple proof-of-concept models and quick prototyping of basic parts.

DLP is a process similar to SLA. The main difference is that it makes use of a digital light projector. It projects the cross-section of the object being printed at a vat of liquid photopolymers resin, curing it. The light is directed to the build surface using a digital micromirror device, which is an array of tiny mirrors that controls where light is projected.

DLP printers are versatile machines that are used to make custom dental models and molds, as well as patient-fit equipment, medical devices, and low-volume visual and functional prototypes. Aside from that, such printers can be used to make jewelry investment molds and casts, car parts, and various models needed for sculpting and prop making. 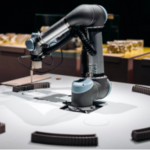 MJF is a powder bed fusion printing technology. It was introduced to the market by the Hewlett-Packard Company in 2016 and built thanks to the company’s investments in jet table materials, inkjet printing, material science, imagining, and low-cost precision mechanics.

The printing process starts with a printer laying down a layer of material powder atop the build surface. An inkjet head runs across the powder and releases two substances — a fusing agent and a detailing agent.

An infrared heating unit moves over the build surface and causes the portions of the powder where the fusing agent was released to melt together. The areas with the detailing agent remain as powder and are shed off, creating the desired geometry.

It is worth noting that each new layer of powder and agent is placed while the preceding layer is still molten. It allows both layers to fuse together, resulting in improved durability of print and finer detail.

At last, the printing process comes to an end. The entirety of the powder bed is moved to a completely separate processing station, which is where the unfused powder is vacuumed up. It can be reused over and over again, preventing the printer from producing excess waste.

MJF is used in a wide range of industries, mostly for manufacturing end-use components and functional prototyping. The most popular of its applications are durable jigs and fixtures, electronic component housings, and mechanical assemblies.

EBM is a unique powder bed fusion technique, as it uses a high energy beam to make the particles of metal powder fuse together. The beam scans the thin layer of the said powder, causing it to melt and solidify in specific areas. With time, the solidified areas are built up in order to create a specific object.

In comparison to other types of 3D printing technologies, EBM is characterized by a high build speed caused by higher energy density. On the flip side, the entire process can only be carried out in a vacuum using conductive materials.

In the medical industry, EBM is used to manufacture medical implants customized to suit the needs of individual patients. It is also used in the aerospace industry, in which it aids in the production of aerospace components that need substantial weight reduction, such as turbine blades for jet engines. 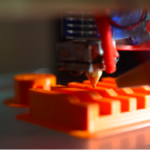 To sum up, 3D printing is a fascinating technology that shows a lot of promise. It already can be used in a number of different industries. Nevertheless, as its capabilities continue to grow, it will become increasingly important to learn about the different 3D printing techniques that are available to you.

The seven types of 3D printing described in the article above should give you a great starting point. Now that you have a better understanding of how each type of 3D printing works and how you can use them, you should have no issues making a more informed decision about which technology you want to start using.