The stunning B-Line condominium development could not have been completed in its current form by any firm other than Sto Panel Technology affiliate SkyRise Prefab Building Solutions in Toronto. There were three primary factors that had to be weighed and considered: the desire of client/developer Marco De Simone of Royalpark Homes for a continuous insulation solution; the need to accommodate a complex design with multiple finishes; and the tight, constricted job site. 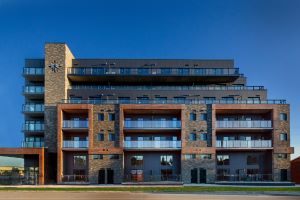 In the end, only SkyRise Prefab Building Solutions offered an option that satisfied all the client’s needs: a StoPanel Classic NExT ci panel system with Sto’s nearly endless aesthetic selections. With Sto Panel Technology and SkyRise Prefab Building Solutions, there was one manufacturer and one complete solution. To offer his condo residents premium comfort and maximum efficiency in the harsh Toronto climate, developer Marco De Simone viewed a continuous insulation solution as essential. However, according to SkyRise Prefab’s Vice President of Business Development, John Sopta, due to the site constraints, the only continuous insulation solution that could work for the project was a prefabricated panel.
“Site logistics make it impossible to do any sort of field-applied work there on the exterior envelope,” Sopta explained. “You can’t even get in there with a baker’s scaffold; forget about setting up the requirements for doing other field-applied work. It’s just not possible. Our premium products made that possible for them in the City of Toronto where our other EIFS competitors wouldn’t have gotten approvals from the city.”
A StoPanel system was an easy sell from a site-logistics perspective, but there was still the question of aesthetics because the building design called for multiple, disparate finishes. Using actual brick was a non-starter for the same reasons on-site EIFS applications were out (no room for scaffolding), but SkyRise Prefab knew they had newly available Sto finish layer options. These options, which could deliver on the design, included StoCast Wood, resin-cast wood grain plank and StoCast Brick, a resin-cast brick. The immediate challenge was showcasing them for the client. The wood grain planks and bricks were so new to the North American market that this would be the first project to use them, but SkyRise Prefab would not let geography stop them. “We took the client and the architect from Romanov to sites all over the Netherlands and Germany,” said Joe Aprile, Executive Director at SkyRise Prefab. “They got to really appreciate what these products look like on buildings.” The trip closed the deal.
The trip to Europe with the client notwithstanding, selling themselves to Royalpark Homes was the easy part. The B-Line project was a challenging build in no uncertain terms. SkyRise Prefab described it as the most complex project they had ever taken on. The panels themselves were intricate, requiring elaborate prefabricated wall assemblies with two or three sections of walls, each with a distinct look, integrated into one. In all, the design called for three finishes: metal, brick and wood. The metal finish was accomplished with StoSignature® Stone, a customized finish surface that featured the look of limestone with a topcoat of StoColor® Acryl Plus for a metal panel look. Brick and wood aesthetics used StoCast Brick and StoCast Wood, never seen before in North America. 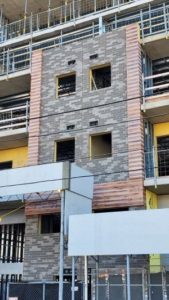 “The technology and the selection of materials allows us to do anything you want,” described Albert Bendersky, SkyRise Prefab’s Director of Project Management & Construction. “You can have any possible color, any possible shape and any possible texture for the exterior envelope. The selection is mind-blowing.”
But the real challenges came once the panels left SkyRise Prefab’s facility. The limitations due to the small jobsite made installation of the prefab StoPanel Classic NExT ci panels difficult. “We were hoisting two or three story high, sophisticated panels 12 feet away from electrical lines on one side, and five feet to the left, there is a plaza,” explained Bendersky. “We had to use a tower crane, because there was ZERO distance between our building and the neighboring plaza.” SkyRise Prefab had a plan, and they took the time to execute it carefully and properly. By taking their time, they saved time. What took them two months, Bendersky estimated would have taken a year by traditional means, if it would have been possible at all. When everything is taken into account – the new Sto customizable finish surfaces, the complex design, the small footprint of the jobsite – as the building stands and where it stands, there was no other way it could have been built and no other manufacturer that could have made it happen. Ultimately, the project speaks for itself. “Every inch of that building is unique,” proclaimed Aprile.