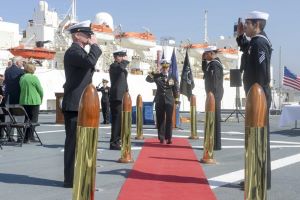 Van Zeyl, a native of New Lenox, Ill., was previously the executive officer of Ticonderoga-class guided missile cruiser USS Princeton (CG-59), and graduated from the United States Naval Academy in 2003 with a Bachelor of Science in astronautical engineering.

"This is a significant moment for Savannah Gold as we embark on a transition to train, certify, and prepare for our on-hull operational tasking", said Van Zeyl. "I am honored to lead this crew and excited to use our expertise and skills to drive long-lasting success for the years to come."

For more news from Commander, Littoral Combat Ship Squadron One, visit https://www.surfpac.navy.mil/comlcsron1/ or follow on Facebook at www.facebook.com/COMLCSRONONE/