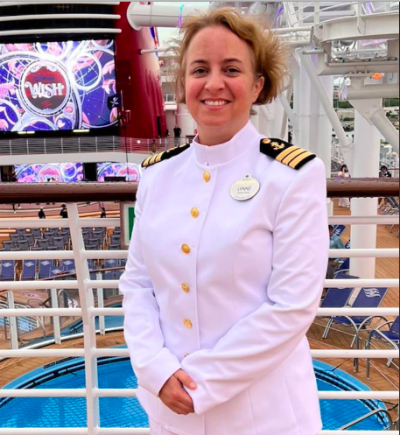 David Corson December 24, 2022
A native of Atlanta, Ga. currently residing in Reevesville, S.C., McKee holds a civilian job with the Disney Cruise Line (DCL), which she often refers to as “The Mickey Mouse Navy.”

“Both jobs are about the safety and well-being of those on the ship, whether it is Sailors and Marines in the U.S. Navy Reserve or the crew members and guests aboard the DCL ships,” McKee said.

The public health officer role was created cruise-industry wide in the wake of COVID-19. The primary role of the public health officer is COVID surveillance and routine testing for the crew and contact tracing of positive cases for both crew and guests. Other duties include oversight of isolation and quarantine procedures on board, and submission of the required positive case reports to the Centers for Disease Control, U.S. Coast Guard, and officials from any countries the ship may visit.

The public health officer also assists the shipboard medical team with organizing vaccine events for the crew (e.g., COVID boosters and flu). She is responsible for the health and safety of approximately 3,000 tourists and staff onboard.

According to McKee, the culture of DCL is also very similar to that of the Navy with regard to rank and chain of command.

“Aboard the DCL ships, they even wear white costumes that are very similar to the Navy officer dress whites,” said Mckee, jokingly adding that, at DCL, she is a “three-stripe officer,” appearing to outrank her USNR role.

In 2009, McKee earned her commission and served 8 years of active duty before switching to the Navy Reserve Medical Corps. She was motivated to stay in the Reserve for the culture and traditions the Navy holds. One of those traditions Sailors hold dear is recapping the experiences underway, commonly referred to as “sea stories.” McKee said one of her favorite things about being in the military is hearing everyone’s sea stories.

An alumna of Georgia State University, Atlanta, McKee attended medical school at College of Osteopathic Medicine in Blacksburg, Va., and completed preventative medicine residency at Uniformed Services University in Bethesda, Md. Serving as a medical professional in both military and civilian sectors is a demanding job, one which requires her to protect the people under her supervision from health issues.

In her Navy Reserve role, she is attached to the Marine Air Ground Task Force (MACG-48). As a preventive medicine/occupational medicine officer, her primary role has been in support of medical readiness, both within her unit and her Navy Reserve Center. Her unit coordinates, tasks and provides all administrative, operational, logistical, maintenance, connectivity and network defense requirements for the Marine Air Command and Control System.

As a full time Sailor working with both DCL and the U.S. Navy Reserve, McKee is exploring the world and helping others stay healthy. The appearance of references to nonfederal entities does not constitute endorsement by the United States Department of Defense of the information, products or services contained therein.