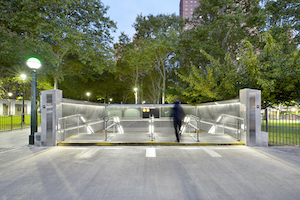 In the aftermath of Superstorm Sandy, the MTA Capital Plan included this station as one of a group of seven stations and one fan plant throughout the New York City subway system that required mitigation measures to prepare for future superstorms to prevent the loss of life, reduce operational disruption, and minimize repair costs. Ultimately, this $32 million federally funded project addressed flood mitigation and resiliency for a range of stations, tunnel portals, fan plants and other critical assets necessary for continuing operations of the MTA.
In addition to the 155th Street Station, the locations included: the Houston Street station (Manhattan), 103rd Street station (Manhattan), 110th Street station (Manhattan), 138th Street Station-Grand Concourse (the Bronx), Roosevelt Island Station (part of the Borough of Manhattan), and 21st Street Station and fan plant (Queens). Urbahn was the project architect and ZFM the general contractor for all seven sites. 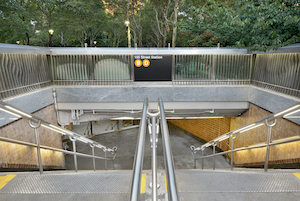 Local conditions determined the specific scope of work at each station. The 155th Street station is located a mere 300 feet from the Harlem River, in an area that was completely flooded during Sandy and is vulnerable to storm surge events. Water intrusion during past weather events has left this station temporarily inoperable, which necessitated upgrades. This project included hardening the perimeter around the entry stairs with an innovative resilient railing and flood stop log system to prevent future water infiltration into the station, as well as the provision of watertight doors in lower-level utility rooms.
According to Natale Barranco, AIA, LEED AP, Urbahn Architect’s Principal-in-Charge, “This $1.8 million project was particularly challenging as the station has only one point of access that had to remain fully operational during construction. Urbahn worked closely with MTA C&D and with the contractor, Zafra Minhas Construction, to ensure that the work was adequately phased and remained on schedule.”
“The 155th Street Subway Station flood mitigation upgrade was one of a series of natural disaster mitigation construction projects Zafra Minhas has successfully completed for the New York City Transit Authority and the MTA since 2016. Totaling $72 million in construction value, these projects have strengthened the resilience of New York City’s public transportation infrastructure and called for installation of innovative flood protection systems such as Pressray stackable flood logs, ILC Dover Flex-Gate movable flood barriers, and FloodBreak MCDs,” said ZFM President and CEO Gilles F. Kacha.
ARUP served as project manager and provided structural and MEP engineering services. The contract manager was URS/AECOM. In addition to Barranco, Urbahn’s team included Ranabir Sengupta, AIA, Design Principal; Nandini Sengupta, LEED AP, Project Manager; and Jonathan Ruiz, Associate - Designer. ZFM’s Project Manager was Ennis Ozgul.
Design Elements
The entrance to the 155th Street underground station is a sole quadruple-wide staircase leading down from the street level to a full-length mezzanine that spans the platform and tracks below it. The staircase opening on the street level is 28-feet-6-inches wide by 21-feet long on the sides. A traditional K-railing, the open cast iron fencing that is used throughout the NYC transit system, originally surrounded the entrance on three sides. Neither the fencing nor the open stair offered any protection against flood waters. Due to its location adjacent to the Harlem River, the neighborhood is within a FEMA flood zone, and has a 100-year flood level of five feet above grade. 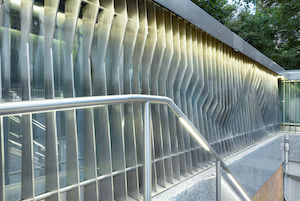