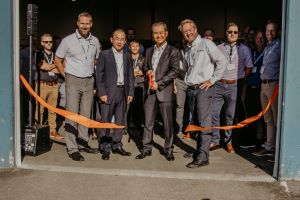 Navien, the leader in condensing technology, has officially incorporated their business in the country of Canada under the name Navien Canada, Inc. Navien business in the United States, Canada and Mexico had been operating as Navien, Inc. since 2006. Now, the American territories will be split among the three separate corporations, with the United States still operating as Navien, Inc. and Mexico operating as Navien Mexico, S.A. de C. V.
“Our business in Canada has grown exponentially over the previous 16 years, making Navien the number one selling manufacturer of tankless water heaters and wall-hung boilers in the country,” said Scott Lee, CEO of Navien Canada, Inc. “By incorporating our business in Canada as Navien Canada, Inc., Navien is demonstrating its commitment to providing nimble, personal and more localized services, and strengthening our partnerships with our customers across Canada.”
Navien commemorated the official announcement of Navien Canada, Inc. on August 29 in Surrey, BC with the grand opening of their first Canada distribution centre and the launch of a new website dedicated to Canada, navieninc.ca. Several Navien distributors, contractors and sales representative partners attended the grand opening, along with key executive members of Navien, including Canada National Sales Manager, Adam Wills.
“Even though our supply chain capabilities have far exceeded industry averages over the last 2 years, we knew more was needed as customer expectations continue to evolve,” said Wills. “That is why this facility, the new Navien Canada distribution centre, has come online. Now we can offer industry leading products, accessories, and parts locally in Canada. For our partners, this means faster deliveries, greater product accessibility, dedicated inventories of add-on components like manifolds and rack systems, and improved profitability.”
For more information about Navien Canada, Inc. and their products, visit navieninc.ca.
About Navien Canada, Inc.
Since 2006, Navien has become one of the fastest growing companies in the home comfort sector in Canada and has established itself as the leader in condensing technology, providing condensing tankless water heaters, combi-boilers, and wall-hung boilers. To learn more about Navien, Inc., and its world-class product lineup, visit navieninc.ca.