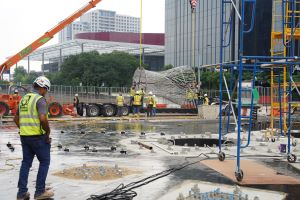 McCarthy Building Companies has completed the installation of the Nancy Best Fountain at Klyde Warren Park, a one-of-a-kind water feature that will be one of the highlights of the 5.2-acre park located in the heart of Dallas. By day, the Fountain will serve as an interactive play area and respite as the Fountain features a 5,000-square foot splash pad, which can accommodate hundreds of children. Every night, the Fountain will display a choreographed water, light and music show which will change monthly.

The Fountain’s design, created by Fluidity Design Consultants, features three stainless-steel “trees,” 14 “rosebud” bubblers, and 106 small nozzles, which create giant “leaves” when they are working in unison. Like all fountains in the park, the Nancy Best Fountain is powered by recirculated water, which goes through a four-step filtration and sanitizing process via UV light and CO2 systems.

McCarthy was involved with building the amenities for the original Park which spans the eight lane-Woodall Rodgers Freeway creating a land bridge between uptown and downtown Dallas. As such, the team understood the challenges the project would face such as a very tight space, heavy car and pedestrian traffic and limitations on equipment and material weight. McCarthy closed one lane of traffic along the Park’s eastern side and one lane of the highway’s frontage road along the Park’s south side to use as access points. They also relied heavily upon on-time deliveries.

“The biggest challenge of the project was setting 80-foot-long, in-ground vaults and the Fountain “trees,” which were 15 feet tall and weighed 2,600 pounds each," said Mario Torres, McCarthy’s project manager. “More specifically, we had to select a crane that was small enough to fit in the access road lanes but with enough reach to place the decorative trees and vaults to ensure there was no weight of the crane on the bridge beams.”

In order to place the vaults, McCarthy dug a 15-foot-deep, 150-foot-long, and 40-foot-wide hole. The two vaults are precast concrete - the water vault came in two pieces and the equipment vault came in 10 pieces - which the team assembled on site. Approximately 500 nozzles with their respective pipes and conduits were used to create the underground system that connects the Fountain to two in-ground vaults. The stainless-steel trees were prefabricated offsite and were installed as single piece in the Fountain.

In creating the Park and Fountain area, the team had to ensure that construction materials would not impact the weight load on the bridge beams. For material fill, they opted to use a lightweight but strong geofoam filling instead of dirt then poured concrete on top of that and used a lightweight dirt for plantings.

McCarthy also constructed a Guest Services building and restroom facilities as part of the project. On the other end of the Park, McCarthy is completing a 6,000-square foot addition to the Sheila and Jody Grant Children’s Park. McCarthy added a splash pad, new playground equipment, a new canopy with a decorative screen wall, and resurfaced the whole of the children’s area with a rubberized material.