How Much Does A Flooded Basement Cost? 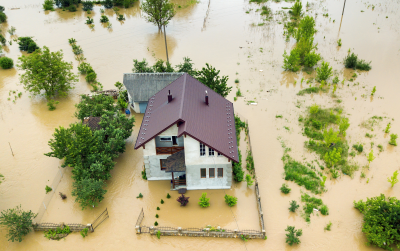 A flooding basement can be a stressful situation for homeowners and is something you cannot usually avoid if it is caused by sewerage build-up or environmental factors.

Seeing water gush into your basement is a scary situation to be in, not only because this is something you cannot control but because it can also leave a wake of damage for you to deal with. A flooded basement can also be a hazardous environment and is something you should avoid getting into contact with, which can make the damage even worse.

When you notice a flood in your basement, you need to call the professionals right away to handle this issue. However, no matter how fast you act, there is going to be some damage left behind that you have to deal with, and this can be expensive.

Why is My Basement Flooding?

There are two main causes of a flooding basement, and both of these are usually unexpected. It is usually difficult to determine whether your basement is going to flood, and therefore this issue can not be prevented until it has already happened at least once.

In most cases, a basement flood will be caused by either harsh weather conditions, which cause rainwater to flood into the lower levels of the home, or from a sewage backup in the basement.

Regardless of the main cause, a flood in the basement can be a very stressful thing to deal with, and this is not something you can handle alone. A flooded basement can be very hazardous and potentially life-threatening if electrical outlets or devices are being used in this part of the home.

This is why if you notice a flood in the basement, you need to act fast and call an emergency line to get immediate attention.

The faster you act, the less damage you may have to deal with following the flood.

How Much Does A Flooded Basement Cost To Repair?

The average flooded basement cleanup cost can vary based on the cause of the flood and the severity of the damage.

As we have mentioned, it is a good idea to call the emergency engineers as soon as you notice a leak in your basement, as this can prevent a lot of damage from taking place as well as preventing things from getting worse. However, no matter how fast you act, there is still going to be some damage to contend with.

Water damage is one of the main things you will have to deal with following a flood, and this can take a long time to clear. Water damage will affect everything in the basement and, if left unattended, can even impact the foundations of your home.

Although it may be expensive to repair the damage left after a flooded basement, this is something you cannot put off. You may be able to claim against your home insurance to help pay for the professional cleanup following a basement flood.