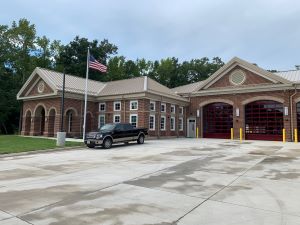 Calculating the risk of taking chances with lightning is a dangerous game. Earlier this summer, lightning struck the Orr’s Island Fire Station in Harpswell, Maine, damaging equipment and disrupting operations, including communication equipment on the tower behind the station.

Had there been an emergency call during the time the fire station was offline, the call may not have gotten through. A lightning protection system installed in compliance with National Fire Protection Association (NFPA) lightning protection requirements would have certainly prevented the damage and interruption of service at Orr’s Island Fire Station. Recent events have brought the importance of essential workers to everyone’s attention. Every day, our safety rests in the ability of fire and medical emergency personnel to immediately respond to life and death situations.

Many emergency situations occur during severe weather events, such as thunderstorms, when keeping the lines of communication up and running for emergency personnel is of the utmost importance.  To ensure continuous operations during storms it is vital for fire stations to be protected from lightning damage.  Fire stations not only need to provide a safe workplace for first responders and staff, but they also must remain fully functional during storms.  A properly designed, installed, and maintained lightning protection system is critically important for emergency response facilities.

Kim Loehr of Loehr Lightning Protection Co. in Richmond, VA, points out that, “When lightning ignites fires or damages sensitive communications equipment, responsiveness and safety resources can be compromised and sometimes even crippled. It’s not unusual for a lightning strike to take out generators, phones, telecommunications and paging systems. In addition, lightning can cause failures of internal building systems, damage equipment and even ignite structural fires at fire stations.

“Fortifying fire stations to withstand hurricanes, floods, earthquakes and wildfires is routinely included in our construction models and building codes. So, doesn’t it make send to safeguard against lightning, too?”

Bill Simpson, President at Smokestack Lightning Inc. in Brookfield, Mass., says he recently completed the installation of lightning protection systems for the Town of Sturbridge., Mass., that included five buildings.

“The town reached out to us,” Simpson says. “Their police and fire station are housed in a single location, and they realized they didn’t want to risk their entire infrastructure going down in a storm.”

Simpson points out that the procurement and subsequent building process for public projects such as fire houses can be arduous. “From the time they initially reached out to us to actually getting the job was a two- to three-year cycle,” Simpson says.

“Most of the Atlanta area fire stations are staffed by firefighters as well as EMS crews,” says Adam Smith of Atlanta Lightning Protection. “They are designed to fully support 15 to 20 workers for 24-hour shifts, which means they are basically living at the station. Also, they have critical equipment that must stay operational at all times in order to effectively communicate and respond to emergencies. If this equipment is not functioning properly, lives could be at risk.”

Smith goes on the explain that fire stations must provide for both structural lightning protection as well as surge protection for connected equipment.  “In my opinion, it is just as important to install appropriate surge suppression devices on all electrical and low-voltage services to minimize equipment downtime. The surge suppression should not be overlooked by the design team. I was at a fire station recently that had a UL compliant Lightning Protection System, but no surge protection had been installed. And yes, they were experiencing surge related issues on low-voltage equipment during storms.”

There is simply no good time for a fire station to be off-line. Ensuring that lightning protection is installed and properly maintained is a must for these facilities.  “After all, lightning is the severe weather event that affects the most people, the most frequently in most areas of our country,” Loehr says. “It just doesn’t make sense that lightning is overlooked in the vast majority of U.S. building codes.”

Established in 1984, East Coast Lightning Equipment, Inc. (ECLE) provides high-quality, UL-listed lightning protection system components to lightning protection design and installation contractors throughout the United States, Canada, Central America and the Middle East. ECLE continually strives to develop high-quality, cost-effective materials that meet or exceed UL and LPI standards for safety. Coupled with a dedication to customer service, this innovative nature has made ECLE a leader in the industry. The family-owned company is based in Connecticut where it manufactures all of its own products in the United States. For more information, please visit https://ecle.biz.