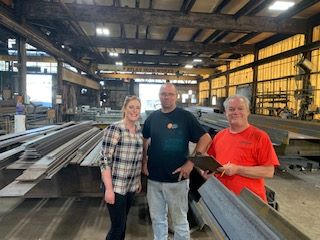 St. Louis-based structural steel fabricator Atlas Iron Works has seen its share of challenges over the course of its 100-year-history, but with the fourth generation at its helm, the future looks bright for the family-owned steel fabricator as it embarks on a major push towards the future. Under new ownership and leadership, Atlas is focused on streamlining processes, introducing new technology, expanding its product and service offerings nationwide and building partnerships with other fabricators in the area while continuing to shape surrounding communities.

“We shadowed employees and figured out there were some improvements to be made. We asked Randy’s daughter Stephanie to help us figure out the finances and streamline the operations. She saw the company’s potential, and with the involvement of Atlas employees’ we’ve been able to revamp incredibly stronger to continue Atlas’ legacy,” said Klein.

Green said he knew from the moment he walked on the shop floor for the first time that he wanted to purchase Atlas Iron Works.

“The amount of history that has been created inside our shop by the hands of our employees is incredible; I wanted to be a part of it. Seeing the quality, skill and dedication of Atlas’ employees was all it took for me,” said Green.

The first decision made by Klein and Green was hiring new management. “We understood that it wasn’t going to take just anyone to get the company into the 21st century. Atlas was going to need the right people in place, and the entire organization had to pull together to achieve this company-wide goal,” said Green.

Klein and Green appointed Stephanie Green as Vice President/CFO to manage the company’s day-to-day operations, with Klein as president and Green as CEO. Stephanie’s management experience started at age 18 when she began helping her father manage the family’s construction, electrical, HVAC and plumbing businesses.

“With my father expanding into other industries and acquiring five other businesses since then, I decided it was time to leave and begin building Atlas Iron Works,” said Stephanie. “As I accepted this new position, I vowed to myself in this role that I’d never change the foundation of how Atlas got started, but we were going to implement the changes necessary to grow and expand. I can’t believe in a short amount of time what our team has been able to accomplish from where we started. Our vision is clear - to never stop improving our product, company culture, employees, and commitment to our customers.”

“The technology we have chosen to implement will predict and track each order down to the individual piece, with daily alerts when an expected deadline is ahead of schedule, or behind schedule. Coupled with old school knowledge, feedback from the entire company, and prayers, Atlas will grow stronger into the future while continuing to produce a superior steel product like it has for the past 100 years,” said Klein.

The company has produced and shipped steel for use in over 20,000 structures across the country for a variety of industries, using only the finest quality U.S. steel products. Backed by a AISC BU certification, Atlas currently employs 18 skilled men and women and is currently expanding its workforce. Here is a small sampling of past local projects:

Since taking over the company, the new leadership has worked to cut over $800,000 in overhead, hire new office staff and shop workers, and develop plans to modernize the shop and expand its product offering with the purchase of custom-built beam line, plate burner and handrail machines scheduled for delivery in early 2023.

Atlas thanks St. Louis for all the wonderful memories and continued support throughout its 100 years of serving the community and is looking forward to the next 100 years.

“From the times of horse-drawn carriages and Model T cars, Atlas’ founders set out to build a legacy of quality steel fabrication in St. Louis that has endured through some of our nation’s most trying times including World War II, the Great Depression, Prohibition, and multiple recessions. As we look back on where the company’s been and where it’s going, one vision remains clear; we couldn’t have accomplished any of this without the support of the St. Louis community and our employees, vendors, colleagues, and subcontractors who stood beside us through thick and thin. We thank them all and are looking forward to a more prosperous future for Atlas,” said Klein.

The History of Atlas Iron Works

Klein’s great-grandfather Otto Klein founded Atlas Iron Works in 1922, along with associates Bill Smith, Charles Galt and Arthur Koppen – four friends who shared a vision to produce the finest quality fabricated steel products in the country. Combining their years of experience in the steel industry, their personal integrity and their commitment to quality, the visionaries opened Atlas Iron Works at 4020 Geraldine Ave. in North St. Louis, Missouri.

When the Great Depression hit in 1929 and many companies failed, Otto bought out Koppen and Smith’s shares in the company and managed to persevere despite multiple years with sales of $1,000 or less. At the start of World War II in 1939, Atlas combined its facilities, workers, and equipment with 11 other steel fabricators in the St. Louis area at the time to provide mass fabrication of structural steel and miscellaneous iron work for the nation’s rapidly expanding war program. Atlas would continue to support the troops throughout WWII by fabricating bulkheads for amphibious landing craft and building the steel hull for the battleship USS Missouri.

Following the end of WWII in the 1950s, Atlas focused its work primarily on commercial projects acquired through local general contractors. It was during this time that Otto’s son, William, bought out the last remaining partner, Charles Galt, and continued Atlas Iron Works as a family-run business alongside his father. Business started to boom in the 1960s as Atlas expanded its capabilities to serve the industrial market and became one of the first fabricators in St. Louis to install automated beam punching equipment to increase the flexibility and efficiency of its metal stamping process.

During the late 1970s, William’s son, Richard, started working for Atlas and the company ventured into the design and manufacture of custom, structural steel mezzanines. Atlas was able to triple its business volume in the 1980s and 1990s as it updated its fabricating equipment to include state-of-the-art Computer Numerical Control (CNC) programming. Atlas ran two shifts until 1998 when it experienced a downturn in production and reduced its staff. Richard was able to keep the shop open, often foregoing his own paycheck, even after his Sales Manager/Vice President Terry Zwick retired in 2016.